Innovation in Emerging Cities was a day-long forum featuring a mix of keynote speakers and interactive panel discussions that explored the role of business, government and post-secondary
institutions in creating and supporting a culture of innovation. The event featured participation from local businesses, all four levels of government, a high school robotics club, and the local polytechnic university.

The City of Maple Ridge and its Economic Development Committee worked collaboratively with the offices of local MP and MLA to plan the event. The inaugural event attracted 250 registrants from throughout Metro Vancouver and the Fraser Valley including local business owners, tech entrepreneurs, post-secondary educators and government officials. 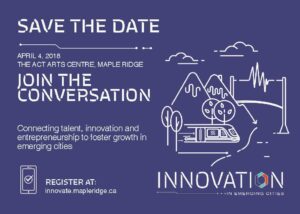